Newspaper at the Global Game Jam

Newspaper at the Global Game Jam

Het Parool interviewed me at the Global Game Jam 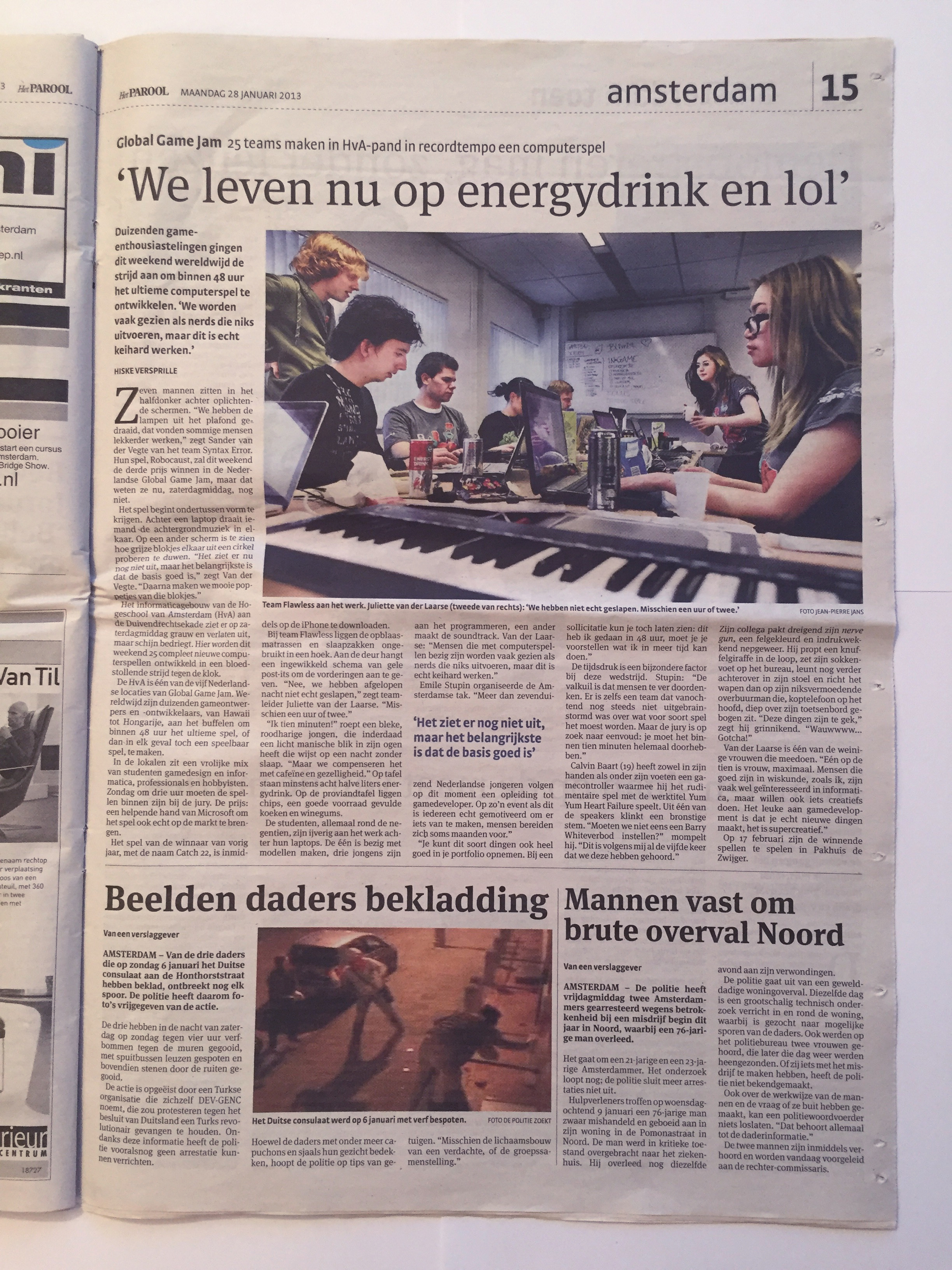 We are living on energydrinks and fun

This past weekend a thousand game-enthusiasts battled it out worldwide to develop the ultimate computer game within 48 hours. “People often view us as dilly-dallying nerds, but this takes hard work.”

In the near-dark seven guys are hunkered behind glowing screens. “We’ve unscrewed the bulbs from the ceiling; some people found it more pleasant to work like that.” According to Sander van der Vegte team leader of Syntax Error. Their game, Robocaust, would win third place in the Dutch Global Game Jam, but right now, Saturday afternoon, they didn’t know this just yet. Meanwhile, the game begins to take shape. On a laptop, someone is mixing the background music. Another screen shows grey squares trying to push each other out of a circle. “It doesn’t look like much at the moment, but the most important thing is that it has a solid base”, says van der Vegte, “next we will turn the squares into nice-looking figures.”

The Computer Science building of the University of Applied Science Amsterdam (HvA) located at the Duivendrechtsekade, looks grizzled and abandoned from the outside this Saturday afternoon, but appearances are deceiving. This weekend, 25 completely new computer games are being developed in a bloodcurdling race against the clock. The HvA is one of five Dutch locations participating in the Global Game Jam. Worldwide, from Hawaii to Hungary, thousands of game designers and -developers are toiling away to make the ultimate game inside 48 hours, or to at least make a playable game. The classrooms contain a merry mix of students studying game design and computer science, professionals and hobbyists. Sunday, at three pm all the games have to be handed in to the jury. The prize: a helping-hand from Microsoft to launch the game on the market for real. Last year’s winning game, Catch-22, is now available for download on iPhone.

At team Flawless the sleeping bags and inflatable mattresses are lying untouched in a corner. A complicate schedule of yellow post-its sticks to the door to indicate progress.

“No, we haven’t slept last night,” says team leader Juliëtte van der Laarse, “maybe an hour or two.”“I slept 10 minutes!” shouts a pale, red-haired boy, who does indeed have a slightly manic look in his eyes, pointing to a night without sleep. “We’re compensating for it with caffeine and conviviality.” The table houses at least eight 17 fl oz energy drinks. On the provisions, table lays potato chips, a decent supply of filled cakes and gummies.

The students, all around nineteen years old, are hard at work behind their laptops. One is busy making models, three guys are programming, and another works on the soundtrack.

The Amsterdam branch was organized by Emile Stupin. “Over seven thousand Dutch adolescents are studying to become game developers. At an event like this everybody is motivated to make it work, some people have been preparing for this for months.” “You can build up your portfolio with events like this. At a job interview you can show them: This is what I was able to pull off in 48 hours, imagine what I can accomplish with more time.”  Time pressure adds a special factor at this competition. Stupin: “One of the pitfalls is that people overthink things. Even this morning one of the teams still wasn’t done brainstorming what kind of game they wanted to make. But the jury is looking for simplicity: You have to be able to understand the game within ten minutes.”

Calvin Baart (19) has in his hands and under his feet a game controller which he’s operating to play the rudimentary game Yum Yum Heart Failure (working title). From one of the speakers sounds a voice. “We should really set a Barry White-ban!” he mutters. “This might be the fifth time we’ve heard this one.” His colleague picks up his Nerf gun, a brightly colored and impressive toy gun. He stuffs a toy giraffe in the barrel, places his sock-clad foot on the desk, leans back even further in his chair and aims the gun at his unsuspecting neighbor who’s hunched over his keyboard, headphones on. “These things are amazing.” He says grinning. “Woooowww…. Gotcha!”

Van der Laarse is one of the few females in the competition.“One in ten students is female, max. People, like me, who are good at math, are often interested in computer science, but want to do something creative too. The fun thing about game development is that you actually get to make new things, it is super creative.”

The public can play the winning games on February 17 in Pakhuis de Zwijger.