Interviewed by ‘De Nieuwe Revu’ about the Global Game Jam 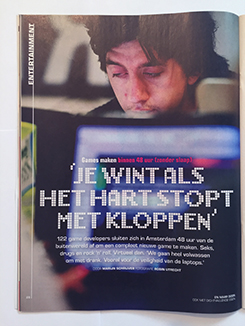 ‘When the heart stops beating, you win’!

Making games in 48 hours (without sleep) – in Amsterdam 122 game developers have sequestered themselves away from the outside world for 48 hours in order to develop a completely new game. Sex, drugs, and rock ‘n roll, virtually. ‘We handle alcohol very maturely, especially to safeguard the laptops.’

They do exist, the genuine nerds; Guys in their early twenties, wearing eyeglasses, living at home who spend all their free time on World of Warcraft. However, there aren’t as much of them as you would expect at the Global Game Jam at the University of Applied Science Amsterdam (HvA). For 48 hours, Friday till Sunday, 122 game programmers and –designers lock themselves in drab classrooms. Divided into teams of four to eight people, the goal is to develop a whole game in that timeframe. These people are the innovators, the rock stars of the IT-world, at least according to themselves.

NOT ENTERTAINING
Several contestants wander bleary-eyed through the building Sunday at 7 am. Nicotine. Coffee. Clean underwear. They are familiar with the building, because many of these frazzled guys in their clammy hoodies are second year students of Game Development. The rooms were they normally have class or work on assignments, are now filled with snoring programmers and designers on air mattresses. Fluorescent lights still on, but with the calming rhythm of code typing teammates in the background.

“The best ones program through the night’, says a guy in the stairwell. They have to, because the deadline is in 8 hours. The challenge started with the announcement of the theme: heartbeat. ‘We set up our computers and went to the bar to brainstorm with the help of beer,’ says Dennis Boersma (32). ‘It is a slightly more inspiring setting.’ The clichés came up quickly, such as games situated in the blood vessels. Not real original, seeing as Global Game Jam was taking place at 350 different locations in 40 countries worldwide at the same time. Shoot ‘Em Ups, flight games… ‘A day and a half later, during the night, we came up with the idea,’ says Dennis. They settled on Viber, a jumping orb that produces music. ‘We made it last night, only to realize at 2.30 am that it looked remarkably like the winner of last year’s Game Jam.’ Unfortunately, we don’t have time to think up something new. O, well, participating is more important than winning anyways. ‘It’s a rush. You wonder whether something is possible. And then it works after 15 minutes of programing. Once in a while something unexpected happens and you come away with something else, something better,’ says Dennis. So, real creative. ‘And finally finishing something for once, that is quite fun. To really make decisions.’

The games should be really intuitive to play, but when Nieuwe Revu, as layman, gets to try several games, the programmers are disappointed. ‘You can’t hear the music correctly,’ state the makers of Viber. ‘You still can’t see that one line.’ In the space of fifty heartbeats we have to use a creature ‘to web-sling like Spider-Man’ as high as we can. ‘It’s small and silly, but addictive,’ says Mathijs Diercjx (39).

Their idea was okay, but the original idea from team CLRx now that was genuinely nice. ‘We’ve been thinking long and hard about euthanasia,’ says Rick van Been (35). ‘You’ve got an old lady and player 1 is the family that’s trying to keep her heart going, while player 2 portrays her deceased partner who wants her with him.’ When player 2 performs well, the old lady begins to see a heaven with her partner and she loses the will to live. ‘It’s a good idea, but probably not entertaining,’ says Rick.

ROBOCAUST
The make-up of the teams differs immensely. You’ve got the programmers (the tech-boys) but you also got the artists for the graphic designs and, real confusing, the designers who build maps and think up game rules. If you’ve got an open slot in your team, you can fill it with a sound designer. However, team CLRx is comprised of two sound designers, one artist and Rick, of whom we haven’t a clue what he does.

This means all the hard work – programming – ends up with 26-year-old Jordin Kee, who hasn’t slept a wink because of this mild form of exploitation. ‘It’s rough, yes. There comes a time when you have to sleep. When you’re starring at a simple piece of code for ten minutes straight and you just can’t make it work. It would have been handy having a second programmer. O, well, other teams have five programmers, and no sound designers. You have to make do with the people you have, that’s the epitome of Game Jam,’ says Jordin.

PSYCHOTISCH
Whereas team CLRx unfortunately shot down their euthanasia idea, quite a few not so innocent games have come into existence. For instance, Cholesterol Damage by team Nerdy Boys, where you play the cholesterol that has to clog arteries to the best of your ability. ‘The more points you score the better. When the heart stops beating, you win.’

Or robocaust Z of team Syntax Error, wherein robots slaughter each other, egged on by a fascist German voice. ‘We were looking for an edgy name,’ states René Derks (30).

The best idea that actually gets executed is from team Flawless. “What affects your heartbeat…?’ ‘Drugs!’ says Juliëtte van der Laarse (20). Huh, what, a girl? Yes indeed, and Flawless has three of them.

More about that later. The game depicts a walk in the woods where you can pick up different drugs. ‘Your heartrate has to stay steady. Coke and speed elevate it, shrooms and weed lower it. The goal is to stay alive for as long as possible. The game also has enemies. You’re completely baked, and all of these creatures come at you that you have to evade.’ Ingenious. ‘Weed makes you fly and then the butterflies can’t attack you any longer.’

This virtual tripping creates a nice contrast with the reality of the school building. Only one male programmer at Flawless has taken drugs Friday night (‘one joint and I was done’).

‘We have gotten addicted to green tea, it keeps you alert,’ says Juliëtte, who slept two hours every night. Of the twelve, quite lovely, female contestants of the Game Jam three of them reside in team Flawless.

Does the game reflect this abundance of X-chromosome? ‘We’ve got more pink colors in our game than any other team,’ says the programmer who lit up. ‘That is because it’s psychotic,’ argues Juliëtte. ‘Doesn’t mean it has to be pink…’ according to the programmer. Additionally, because of the ladies, team Flawless gets a lot of foot traffic, all wanting to see what they are up to.

Juliëtte tries to differentiate the whole ordeal, but when moments later she’s parading through the hallways in her pj’s wearing a clay mask on her face, she cannot deny that females are an extraordinary apparition in the world of game developing.

‘The first time I entered the auditorium, everybody looked up and nobody spoke,’ she says. ‘Some boys are genuinely shy and don’t dare to talk to you. I’ve already received several declarations of love. Or you find out that a boy you don’t even know has had a crush on you for forever.’ *see 1

ENERGYDRINKS
It won’t be surprising that one of the highlights of the weekend was a visit from the Red Bull promo girls, Saturday night. The energy gained from the drinks was then expelled into a massive ‘Nerf gun’-fight. But even with foam rubber bullets flying around, most teams kept doggedly working at their laptops. ‘I got my jollies from an abundance of silly jokes,’ says René Derks maker of the holocaust-robots.

In response to the Nerf gun fight, Jordin from team CLRx was especially curious how the HvA building would hold up as a map for a Shoot ‘Em Up game.
Only Ron Mayland (37) and his teammates went into town that night. ‘To the Leidseplein at 3am, to get some food.’
‘We are very well behaved children here,’ says Sievajet Rahimbaksh (25), though amidst the energy drinks a few beers have been consumed. ‘We handle alcohol very maturely. Especially to safeguard the laptops,’ says the second year student. It has got to get boring sometimes. ‘It only happens once a year and it comes with a lot of stress attached, but it’s good for you. You’re here to get better. And you learn to be satisfied with less,’ he says.

ODDBALLS
Sievajet is designing a game where you get to play a monster that is stalking its pen pal, a young lady. ‘The goal is to stalk her, unseen, for as long as possible,’ he explains. ‘And no, it isn’t autobiographic.’
A normal weekend for Sievajet would have meant working and then going home for a game session. ‘I don’t play games like World of Warcraft as frequently anymore. It is a huge fucking undertaking to design games and you experience that when you play one. And oftentimes you think: I could have done that better. It’s better if you don’t love games too much when you are designing them as well.’

A couple of 17 fl oz Monster-energy drinks and an array of potato chip bags later the 48 hours have come to a close. Satisfaction and mostly relieve can be read from the pale, tired faces. Nieuwe Revu’s favorite, the Space Game, sadly appears to still be too rudimentary and doesn’t receive a prize. The ladies promise to yet perfect the game outside of the Game Jam. The bronze goes to Robocaust Z and it gets to go through to the national finale in February. The winning team turns out to be CLRx, the team that decided not to make a euthanasia game. Those game nerds, oddballs every one of them.

*1 Sadly, this quotation has been taken out of context by the writer, despite the fact that I — like all the other female Game Development students — indeed stood out, there certainly was no completely silent auditorium filled with adoring boys scattering love declarations about. ~ Would have been great though! And I am still waiting for a cinematic moment like that to happen in real life, hahaha. But I get that they wanted to emphasize the contrast between female developers and the nerdy stereotype of game developers, although I do not fully agree.