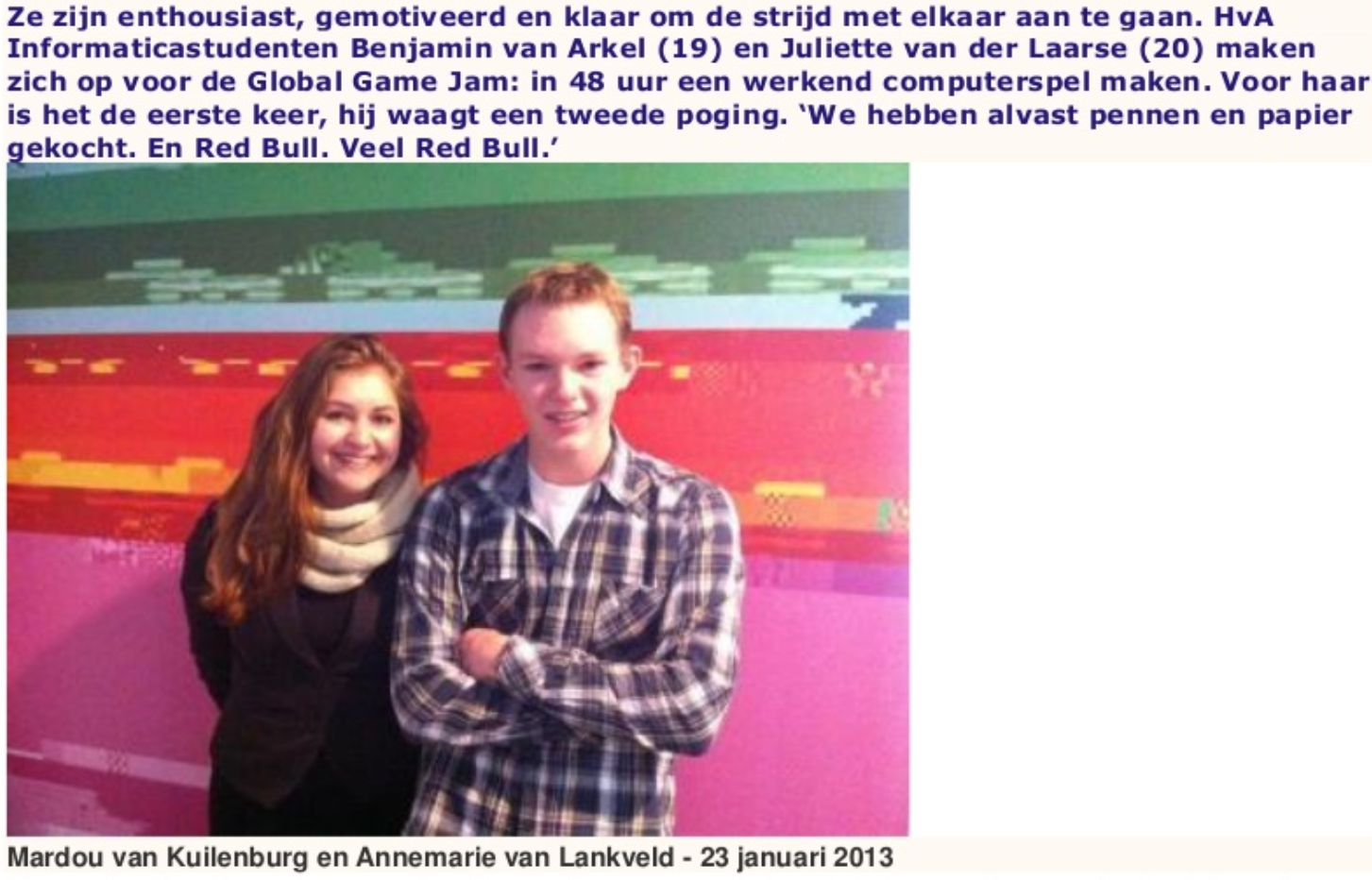 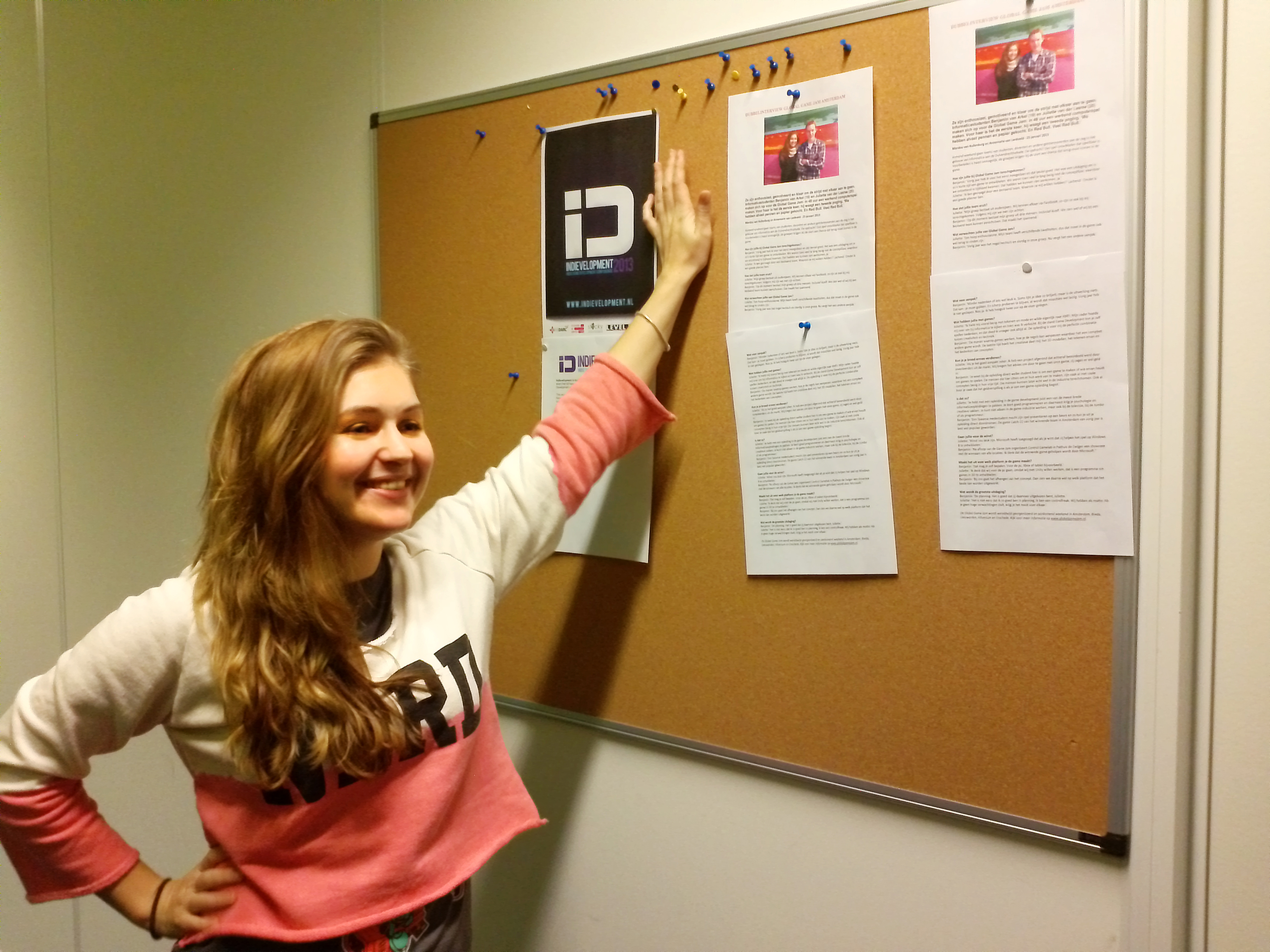 Mardou van Kuilenburg and Annemarie van Lankveld –
They are eager, motivated and ready to do battle. HvA (University of Applied Science Amsterdam) students Bejamin van Arkel (19) and Juliëtte van der Laarse (20) are getting ready for the Global Game Jam: to make a working computer game in 48 hours. She’s entering for the first time, while it is his secong go at it. ‘We’ve been stocking up on pen and paper. and red bull. lots of red bull.’

This weekend students, teachers and other interested parties team up in the Computer Science building located at the Duivendrechtsekade. Their assignment; developing a playable game. Preparing beforehand is almost impossible; on the day the teams will be informed of the theme for the game.

HOW DID YOU END UP AT THE GLOBAL GAME JAM?
Benjamin: ‘Last year, I entered for the first time and I really enjoyed it. It was a challenge to develop a game in such a short time. We got stuck on the concept phase for way too long, which made us terribly pressed for time. We should’ve seen that one coming.’

Juliëtte: ‘I got asked by an existing team. Why they wanted me?’ Laughing: ‘Because I am a great planner.’

Juliëtte: ‘My group is compiled of senior year students. We know each other through Facebook, that’s how they winded up with me. Right now, I think, there are eight of us.’

Benjamin: “My group contains three people as of now, myself included. We’ll have to wait and see whether we can join an existing team. That adds a level of excitement to it all.’

WHAT DO YOU EXPECT OF THE GLOBAL GAME JAM?

Juliëtte: ‘Heaps of enthusiasm. My team is very varied with lots of different qualities, which will be represented in the game.’

Benjamin: ‘Last year, chaos and disorder ruled in our group. This year we require a different approach.’

WHAT KIND OF APPROACH?
Benjamin: ‘Less time spent thinking about whether something is fun or not. Sometimes the idea seems brilliant, but the end result is crap. That is always a possibility – you have to take that chance. And to keep on target though that might be tricky. Last year, I didn’t sleep a wink. Well, maybe an hour or two, max, on the floor.

WHAT IS YOUR INTEREST IN GAMES?

Juliëtte: ‘Mostly I was interested in drawing and fashion and I was set on going to the AMFI (Amsterdam Fashion Institute). But then my dad convinced me to check out Computer Science and I was sold. At the stand for Game Development they had the option to design your own games, something I used to do as well. For me Game Development is the perfect mix between creativity and technology.’

Benjamin: ‘The way games work, and by changing the rules you can turn it into a completely new game. Lately, I’ve been fascinated by the creative aspect: 3D-modeling, drawing it and thinking up concepts.’

CAN YOU MAKE A LIVING OFF OF IT?

Juliëtte: ‘If you’ve got the right attitude, certainly. I finished a project that afterwards got reviewed by real investors. They gave us the advice to continue working on our game; they could see its potential.’

Benjamin: ‘You immediately know which students are here to develop games and which just love playing games. People who want to make this their career are often already working on cool concepts in their spare time. Those people will certainly end up in the game business. Even though you frequently get to hear from people that starting a game related education is a waste of money. ‘

Juliëtte: ‘Not even close. An education in game development is one of the broadest Computer Science educations there is. You learn to become a programmer and you also follow creative subjects and psychology. Career-wise you won’t just be able to interview in the game-industry, but also for television, game developer JUMBO or for a programming job.’

Benjamin: ‘A Spanish fellow-student was allowed to present his game on a Fair, that’s one of the ways you can roll into a job straight out of school. Last year’s winning Amsterdam Game Jam game Catch-22 has gotten a fairly large fan base.’

ARE YOU IN IT TO WIN IT?

Juliëtte: ‘Winning would be nice. Microsoft has promised to help develop the winning game on Windows 8.’

Benjamin: ‘After the Game Jam, Control Gamelab will organize a showcase of the winners of all locations at the Pakhuis de Zwijger. My guess is that the winning game will be helped by Microsoft.’

DOES IT MATTER FOR WHICH GAME PLATFORM YOU DESIGN THE GAME?
Benjamin: ‘You get to decide for yourself. PC, Xbox or Tablet, for instance.’

Juliëtte: ‘I think we will go with PC, because we want to work with Unity, a program to develop games in 3D.’

Benjamin: ‘Ours will hang on the concept. Afterwards we’ll see which platform will be best for working out our chosen concept.’

WHAT WILL BE THE BIGGEST CHALLENGE?
Benjamin: ‘Scheduling. It’s a good thing you were selected for just that, Juliëtte.’

Juliëtte: ‘It’s not that I’m that great at scheduling, I’m a control freak. Our team has the motto: If you don’t set the bar high, you’ll never achieve anything special.’

The Global Game Jam is organized worldwide and will be held this weekend in Amsterdam, Breda, Leeuwarden, Hilversum, and Enschede. For more information check out www.globalgamejam.nl.