Interview on Nerd- and Geekculture

Interview on Nerd- and Geekculture

Interviewed about being a female Game developer and Tech Startup founder 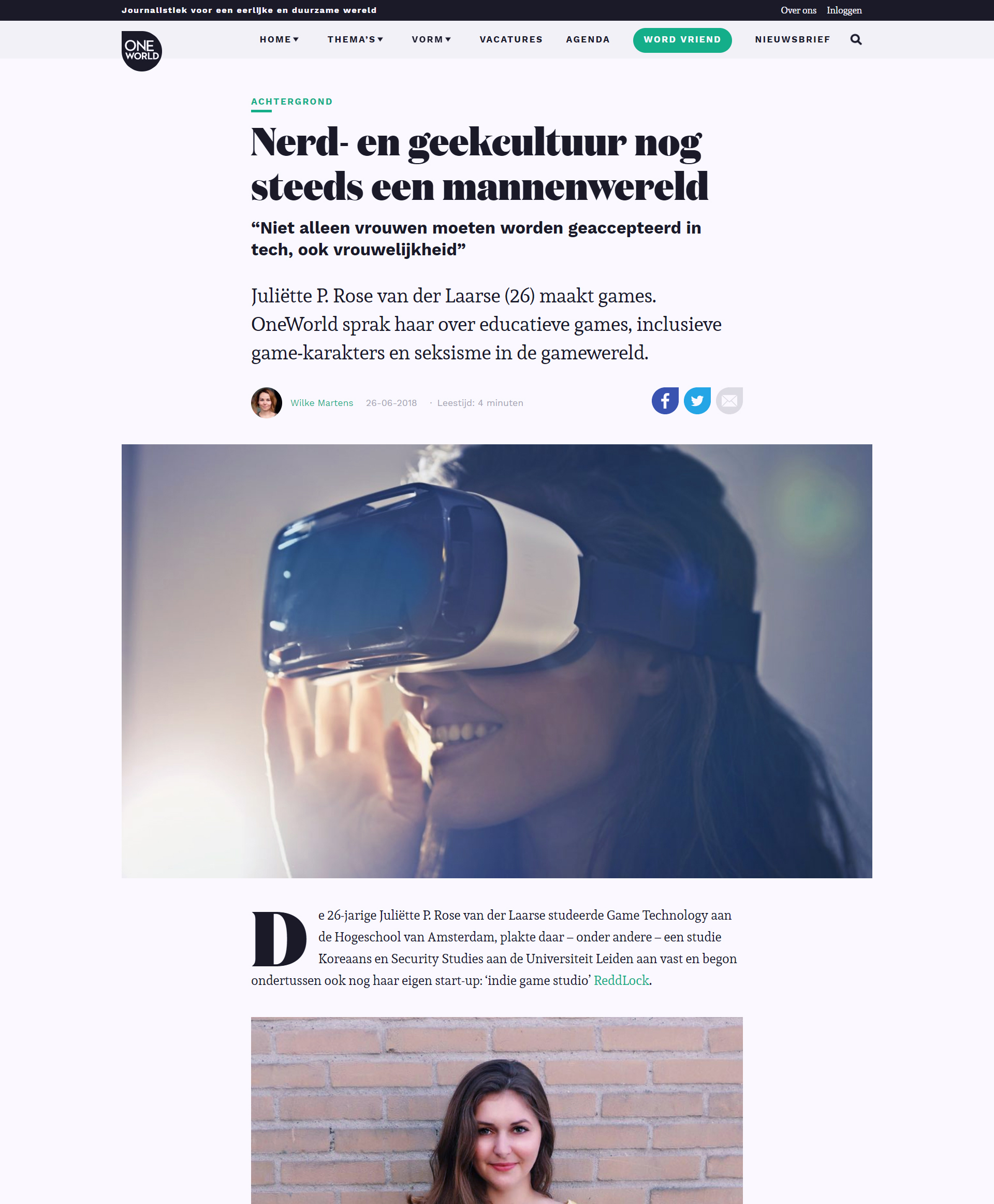 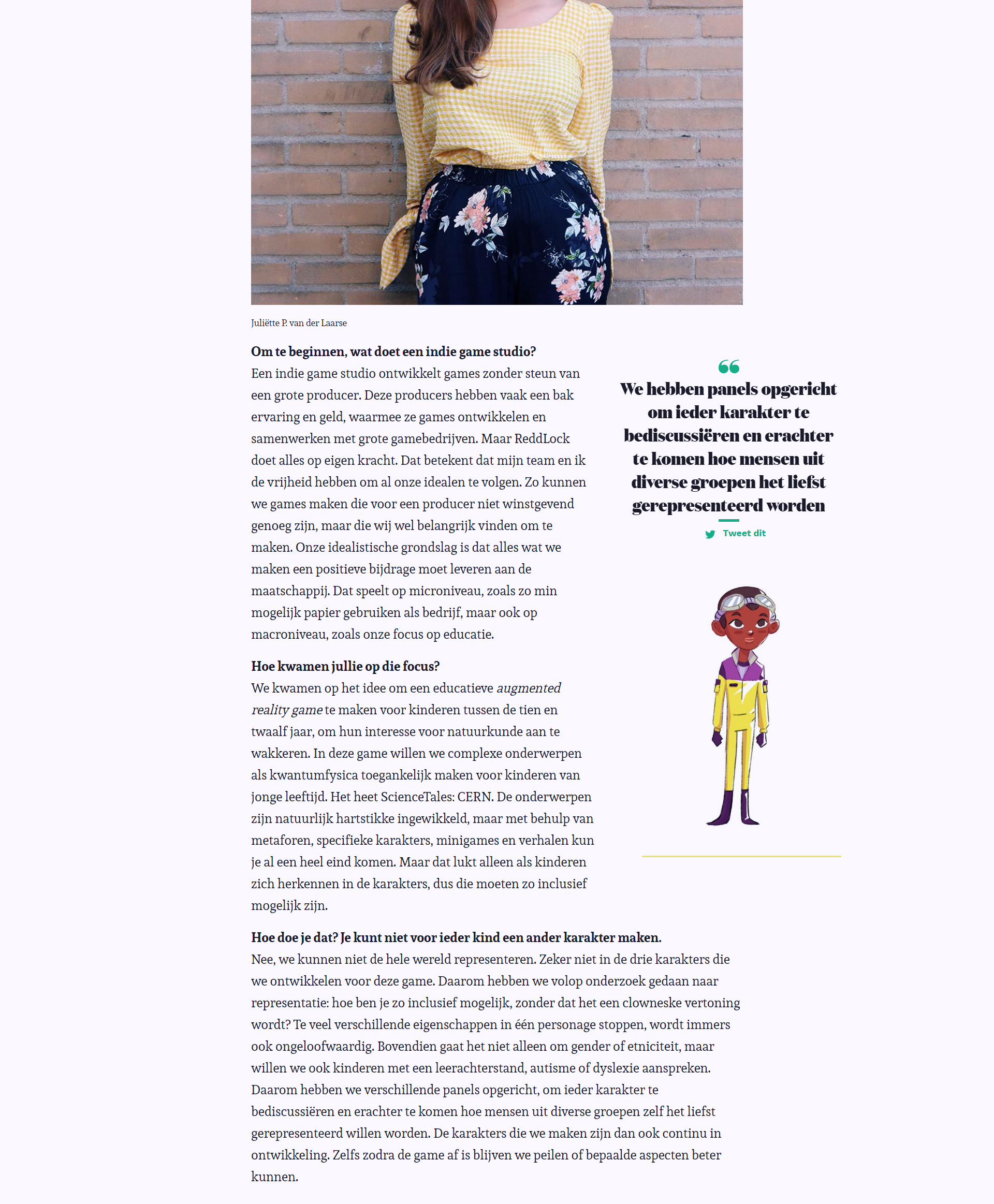 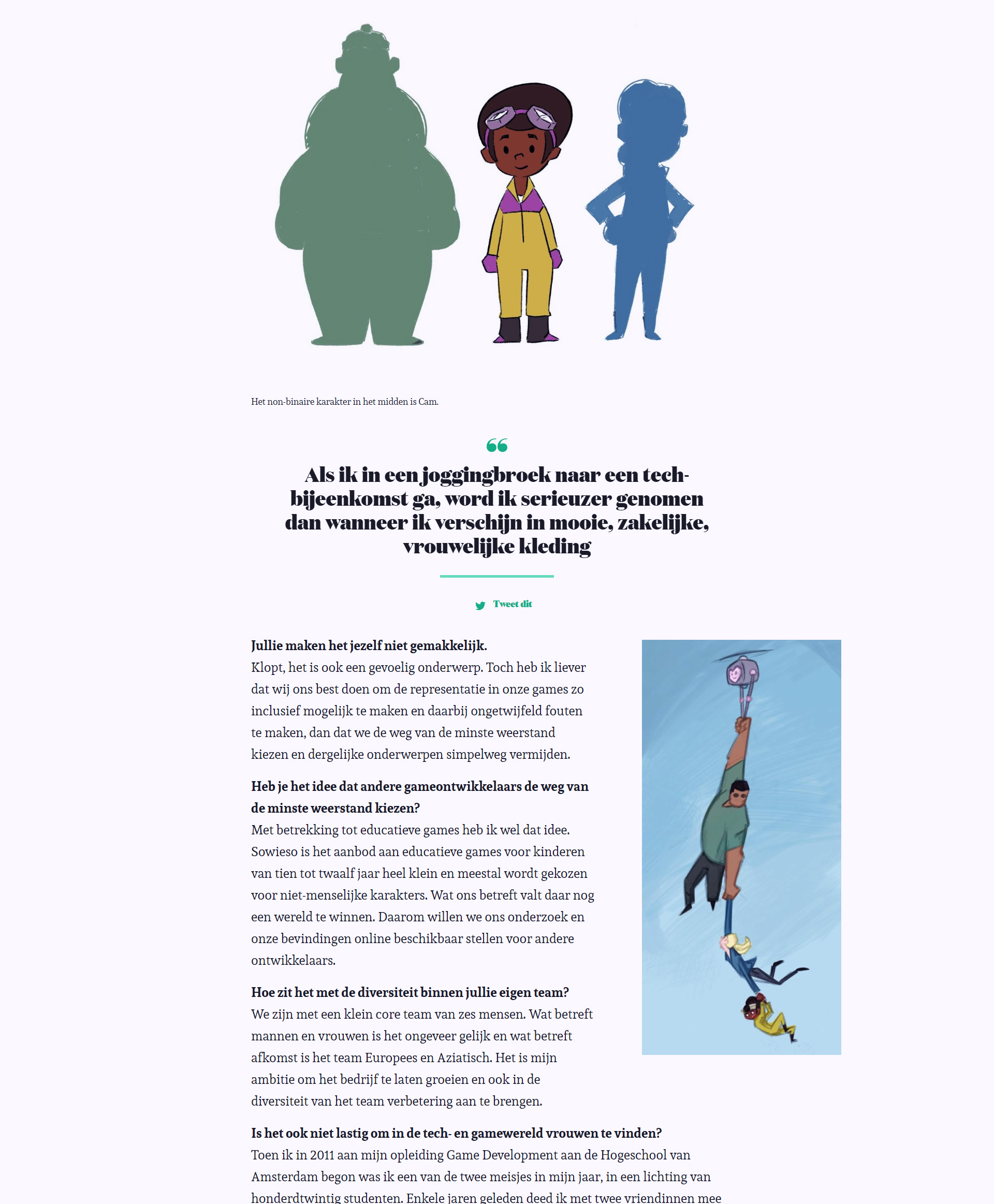 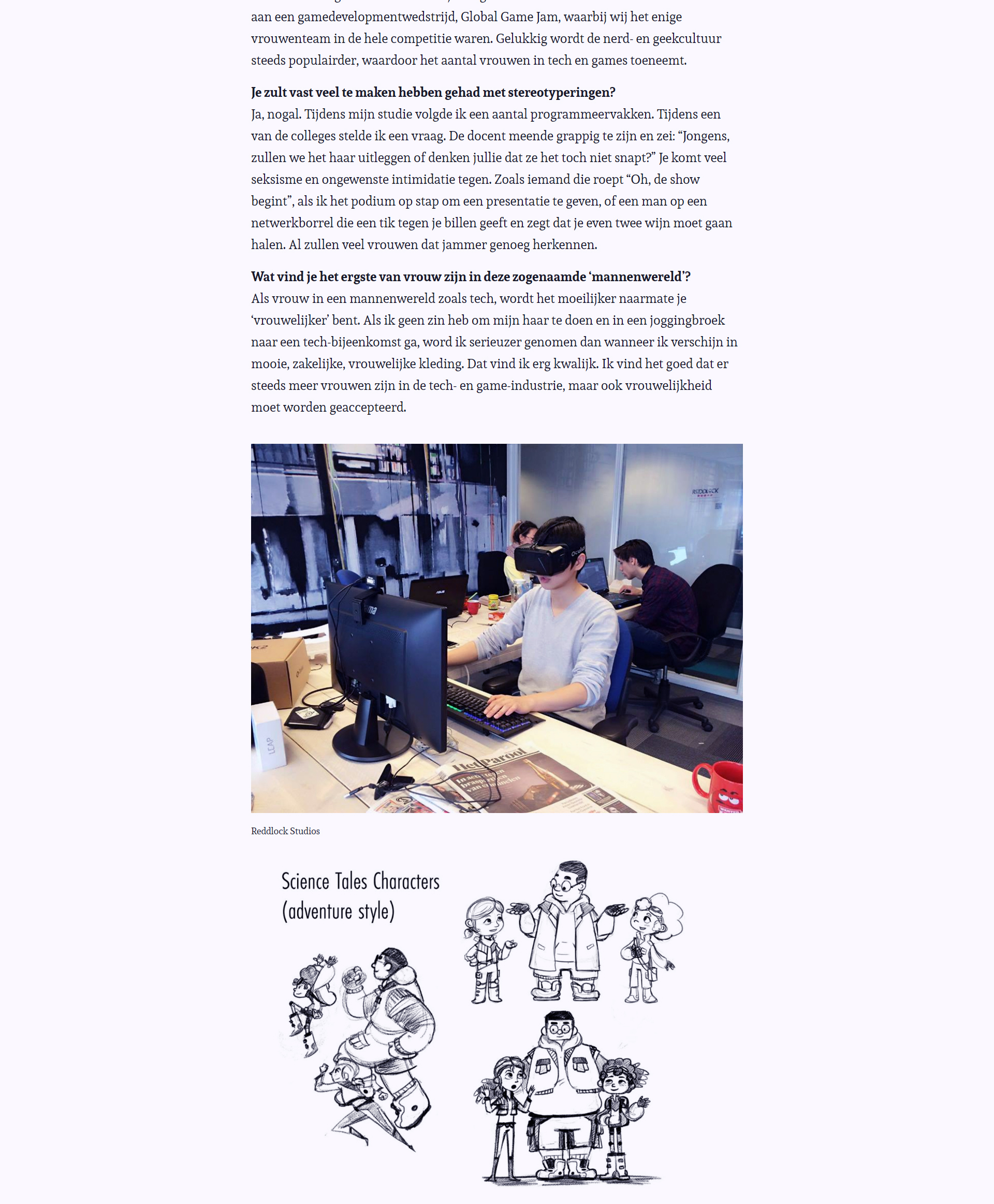 Nerd and Geek Culture is still a Man’s World

First things first, what does an indie game studio do?

An indie game studio develops games without the support of a major producer. These producers often have a lot of experience and money, with which they develop games and collaborate with large game companies. But ReddLock does everything on its own. That means that my team and I have the freedom to follow all our ideals. This way we can make games that are not profitable enough for a producer, but which we do find important to make. Our idealistic foundation is that everything we make must make a positive contribution to society. This plays a role at the micro-level, such as using as little paper as possible as a company, but also at the macro level, such as our focus on education.

How did you come to that focus on education?

We came up with the idea of creating an educational augmented reality game for children between ten and twelve years old, to stimulate their interest in physics. In this game, we want to make complex subjects such as quantum physics accessible to children of a young age. It is called ScienceTales: CERN. The subjects are of course very complicated, but with the help of metaphors, specific characters, mini-games, and stories you can go a long way. But that only works if children recognize themselves in the characters, so they must be as inclusive as possible.

How do you do that? You cannot create a different character for every child.

No, we cannot represent the entire world. Certainly not in the three characters that we develop for this game. That is why we have done a lot of research into representation: how can you be as inclusive as possible, without it becoming grotesque? After all, putting too many different traits in one character becomes unbelievable. Moreover, it is not only about gender or ethnicity, but we also want to appeal to children with learning difficulties, autism or dyslexia. That is why we have set up different panels to discuss each character and to find out how people from different groups prefer to be represented themselves. The characters that we make are therefore constantly evolving. Even after the game is finished, we continue to gauge whether certain aspects can be improved.

“When I go to a tech meeting wearing sweatpants, I am taken more seriously than when I appear in beautiful, business-like, feminine clothing”

You are not making it easy on yourself.

True, it is a sensitive subject. Nevertheless, I would prefer that we do our best to make the representation in our games as inclusive as possible and – without a doubt –  make mistakes, rather than choosing the path of least resistance by simply avoiding such issues.

Do you think that other game developers choose the path of least resistance?

When it comes to educational games, I do think so. The range of educational games for children between the ages of ten and twelve is very small and they usually chose non-human characters. As far as we are concerned, there is still a world to be won. That is why we want to make our research and our findings available online, for other developers.

What about the diversity within your team?

We are with a small core team of six people. In terms of men and women, it is about the same and in terms of origin, the team is European and Asian. It is my ambition to grow the company and also improve the diversity of the team.

Isn’t it difficult to find women in the tech and game world?

When I started studying Game Development at the Amsterdam University of Applied Sciences in 2011, I was one of the two girls in my year, in a group of one hundred and twenty students. A few years ago I participated in a game development competition, the Global Game Jam,  with two female friends and we were the only women’s team in the entire competition. Fortunately, nerd and geek culture is becoming increasingly popular, increasing the number of women in tech and games as well.

Did you have to deal with a lot of stereotyping?

Yes, I did. During my bachelor, I followed several  programming courses. I asked a question during one of the lectures. The teacher thought he was being funny and said, “Guys, shall we explain it to her or do you think she wouldn’t get it anyway?”. You come across a lot of sexism and unwanted harassment. Like the guy who shouted “Oh, the show starts”, when I stepped on stage to give a presentation or this man at a networking event who slapped my butt and told me to bring him two wines. Many women will, unfortunately, recognize that.

What do you think is the worst thing about being a woman in this so-called “male world”?

As a woman in a man’s world such as tech, it becomes more difficult the more feminine you are. If I don’t feel like doing my hair and go to a tech meeting wearing sweatpants, I am taken more seriously than when I appear in beautiful, business-like, feminine clothing. I find that very problematic. I think it’s good that there are more and more women in the tech and game industry, but femininity should also be accepted.