Nextgengamerz visited my team at the Global Game Jam 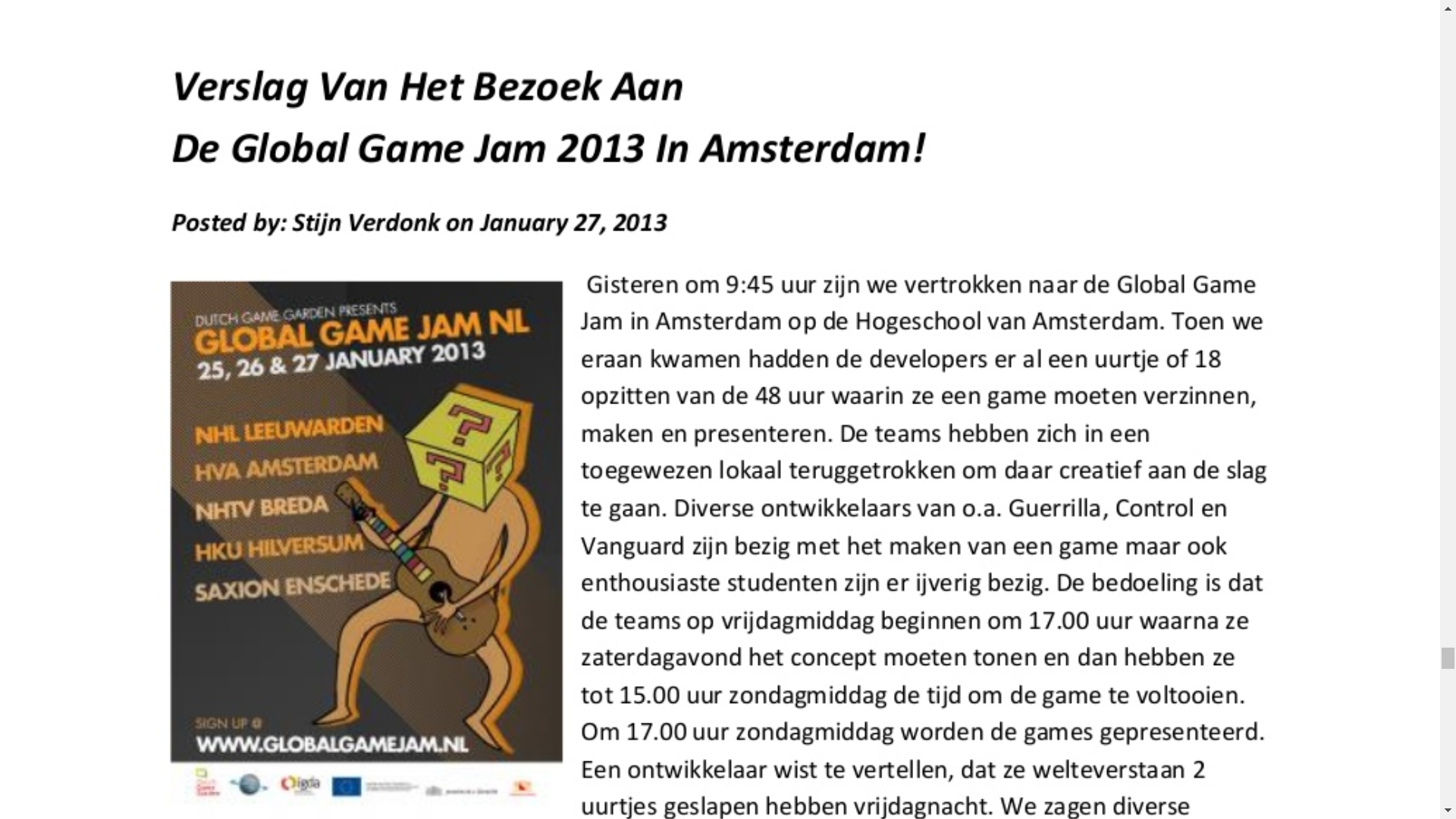 Report of Our Visit to the Global Game Jam 2013 in Amsterdam!

At 9.45am yesterday we made our way to the Global Game Jam in Amsterdam, held at the University of Applied Science Amsterdam (HvA). When we arrived the developers had already been hard at work for 18 of the 48 hours allocated for thinking up a game idea, developing it and presenting it. the teams have sequestered themselves in allotted classrooms to express themselves creatively. Several developers of guerilla, control, and vanguard, to name a few, are busy designing games, but there are also enthusiastic students diligintly at work. The idea behind the game jam is that the teams kick off friday at 5pm, then saturday night they have to settle on a concept which they will have until sunday 3pm to execute into a fully functioning game. The finished games will be presented sunday at 5pm.

One developer was able to tell us, that they have had a total of 2 hours sleep Friday night. We could see several mattresses lying next to the desks and we came across a couple of Red Bull ladies who were distributing Red Bull free of charge. There was even a crew preparing to broadcast a radio show to keep everyone informed of the event.

We were able to have a quick chat with team Control, who explained to us the theme of this year’s game: ‘Heartbeat.’ Their developers already finished with a prototype of the game, which was already playable with the help of an Xbox360 controller. We were allowed to test the game out. I will attempt to explain the game to give you an impression of what exactly the teams are working on. The bottom of the screen is where you start to play with a little figure discharging a red and green line. The green line can be controlled with the LB button and the red line with the RB button. On the entirety of the screen several orbs of different sizes are placed, the idea then is to sling your way up to the top with the lines, Spider-Man-style. In 100 beats you have to get as many feet up as possible. When your velocity is relatively low you won’t be able to ascend as quickly and you won’t be able to reach the topmost orbs. The game will be accompanied by the soundtrack of heartbeats; the lower tiers will sound a slow heartbeat when you grabbed the orbs, whereas the top tiers will sound an accelerated heartbeat. At the time of our test run the music wasn’t yet operable, but the lady and gentlemen of team Control were kind enough to give us a preview of the soundtrack to give us a rough idea of what it would sound like. I have to say it had the right feel to it right away and the simplicity of the game was very pleasant. It is one of those games that you instantly master & understand and that you will keep on playing. Unfortunately, at the time of our visit, Control had not yet come up with a name for the game.

We paid Guerilla, the inventers of the Killzone games, a visit as well. One of the Art Directors of Guerilla explained to us what’s involved in programming a game, which was very enlightening to us as we knew next to nothing about that subject. The good man just finished a 40-hour workweek and had thus arrived late Friday and sadly wasn’t able to show us a working game yet. He specified that he enjoyed participating in the Global Game Jam, because working on a triple A title is great fun, but is has its limitations. Oftentimes you are bound to certain expectations, and the innovations and creativity you had in mind aren’t always applicable to those expectations. According to him the Global Game Jam gives him the opportunity to create anything he wishes, which makes for a nice change.

We also checked out a group of students, team Flawless,

who had the idea, as they said, to have figures take different kinds of ‘drugs’, such as shrooms and speed. When the figure eats shrooms his heartbeat will slow down, and when he uses speed his heartrate will become elevated, based on this the figure would move slower or faster. The whole thing was accompanied by fun music. The sound when you picked up a shroom was really relaxed and when you took speed the soundtrack became upbeat and tense.

but you could tell that time played a very important factor in whether or not every idea was feasible. They wanted to make the game kid friendly, it wouldn’t contain actual drugs but it would implicitly reference to it. And so the shroom became a frog.

It was an educational and fun filled day and the only thing left now is to wait and see which game will take home the prize. As said, the results will be announced at the end of the Game Jam. We might even come across the winning game on Android or iOS, as with the winners of last year. Below you will find a link to the Amsterdam Global Game Jam website for more information.