Interviewed by the University Newspaper as Former AUAS Student 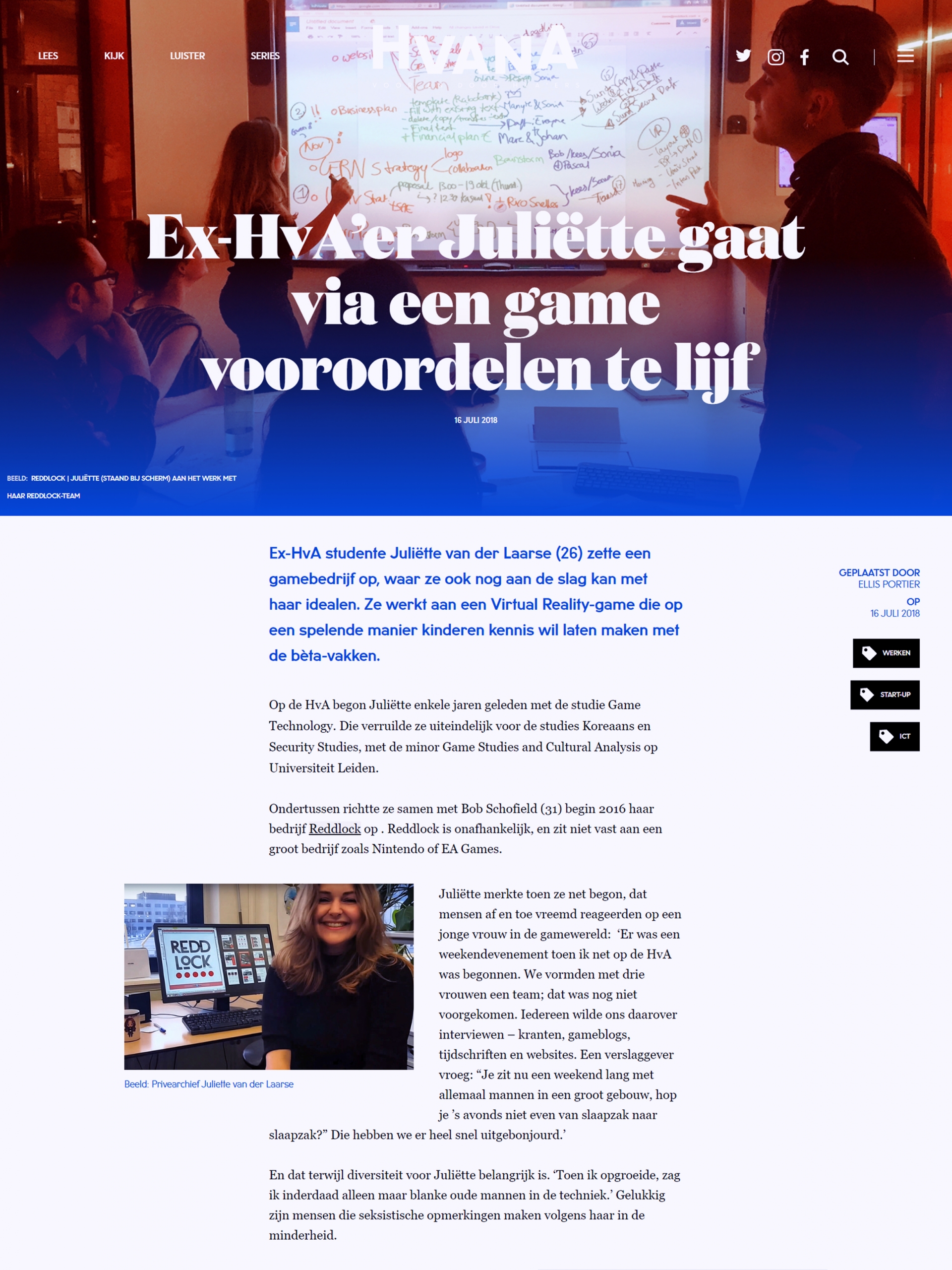 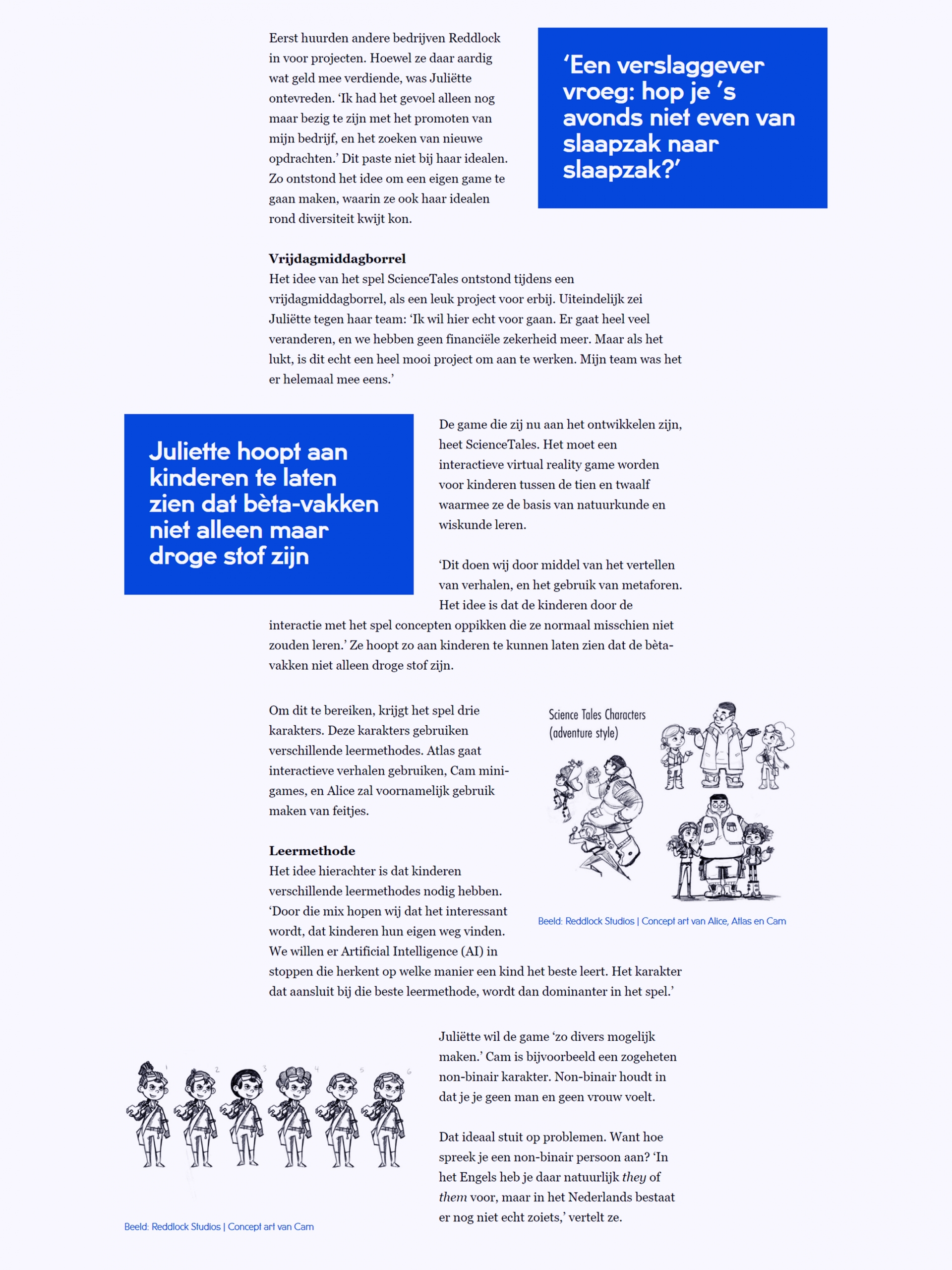 Former AUAS student Juliette van der Laarse (26) founded a game company in which she can also work on her ideals. She is working on a Virtual Reality game that introduces children to science subjects in a playful way.

A few years ago, Juliette started studying Game Technology at the AUAS. She transferred to Leiden University to study Korea Studies and Security Studies with a minor Game Studies and Cultural Analysis. Meanwhile, she founded her company ReddLock with Bob Schofield (31) in 2016. ReddLock is independent and is thus not tied to a bigger company like Nintendo or EA games.

When she just started out, Juliette noticed that some people reacted a bit strange to a young woman in the game world: “There was this weekend event at the AUAS when I had just started studying there. We formed a team with three women; that had not happened yet. Everyone wanted to interview us about that – newspapers, game blogs, magazines, and websites. A reporter asked: ‘You are working in a large building with all men for a whole weekend, don’t you hop from sleeping bag to sleeping bag during the night?’. We got rid of him very quickly.”

Diversity is, therefore, important to Juliette. “When I grew up, I only saw white older men in technology.” Luckily, she says, people making sexist remarks are few.

A reporter asked: “You are working in a large building with all men for a whole weekend, don’t you hop from sleeping bag to sleeping bag during the night?”

ReddLock used to be hired by other companies on a project basis. Although she made quite a lot of money, Juliette wasn’t happy. “I felt like I was only busy promoting my company and looking for new projects.” This did not fit her ideals. This is how the idea arose to make her own game, in which she could also express her ideals regarding diversity.

The idea of ​​the game ScienceTales came about during a Friday afternoon drink, just as a fun project on the side. Eventually, Juliëtte said to her team: “ ‘I really want to go for this. A lot is going to change, and we will no longer have any financial security. But if it succeeds, this will be an amazing project to work on.’ My team luckily totally agreed.”

Juliette hopes to show kids that science subjects are not just dry matter.

The game they are developing now is called ScienceTales. It will be an interactive virtual reality game for kids between 10 and 12 years old in which they will learn the basics of physics and math.

“We do this by telling stories and using metaphors. The idea is that kids will grasp concepts they would usually not learn by applying game elements and making the experience interactive.” She hopes to show kids that science subjects are not just dry matter.

To achieve this, the game works with three characters. These characters each use a different teaching method. Atlas will teach through interactive stories, Cam uses mini-games, Alice will mostly focus on facts and more traditional methods.

The idea behind this is that each kid does best with different learning methods. “It is this mix of methods that will make it interesting. Kids will be able to find their own way through the subject matter. We will use Artificial Intelligence (AI) to recognize what learning path works best for the kid. The characters will then adapt to this, and teaching becomes personal.”

Juliette wants to make the game ‘as diverse as possible’. Cam, for example, is a non-binary character. Non-binary means that you neither feel like a man nor a woman.

This ideal does face some problems. Because how do you address a non-binary person? “In the English language they often use ‘they’ or ‘them’, but in Dutch, there is no strong equivalent”, she says. A few elementary schools also warned her: ‘Non-binary language may not be used in elementary schools, because this is not acknowledged proper Dutch’.

Juliette, therefore, decided to change the original concept and will start by publishing a consumer version for ScienceTales. Instead of working on an in-class-focussed product, she is now working on a mobile game for personal use.

This has one big advantage. Since she no longer has to adhere to the rules and system of Dutch elementary schools they are now free in executing their own vision. “The product might have changed a little, but the original idea has not. We were able to truly put our ideals in this new version.”