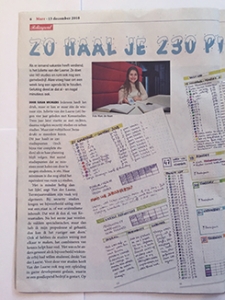 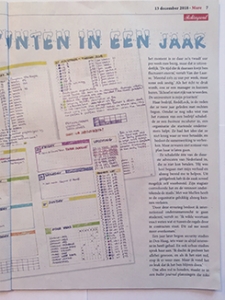 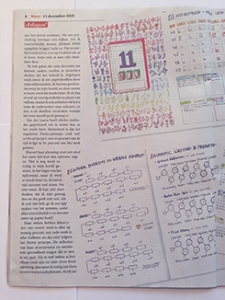 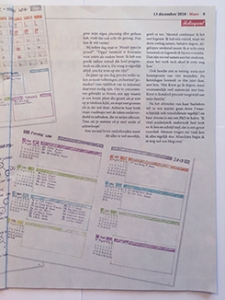 If anyone has earned a vacation, it is Juliette van der Laarse. She does four (4!) bachelors and runs a game company. Mare asked her to keep an agenda for a week. Fortunately, she already did – and quite meticulously.

By Susan Wichgers |  Everyone is busy, but there can only be one winner. Juliette van der Laarse (26) started with Korea Studies four years ago. Two years later she started studying Law, followed by Security Studies and Urban Studies. “But not full-time,” she emphasizes several times. This year she earns 230 credits (still almost four complete programs) if she continues to follow her schedule. The number of credits that she must earn to continue her studies is at least 160. Her minimum is therefore still the equivalent of more than 2.5 programs.

“It’s less intense than it seems,” says Van der Laarse. “First-year courses are often fairly general. In Security Studies, for example, we were taught what a state is, or what orientalism means. I already knew that from Korea Studies. After the first year, the courses become more specialized, but by then I have already passed my propaedeutic year, so I can take it easier.”

Even though the bachelors have little to do with each other, combining knowledge helps her a lot. “It would have been different if I had wanted to combine it with studying mathematics,” Van der Laarse thinks. Van der Laarse also did a bachelor in Game Development before starting these four bachelors, in which she started a successful business. She is currently working on it for about twelve hours a week, but that is exceptional. “The time I spend on it [my business] fluctuates enormously,” says Van der Laarse. “Usually about 25 hours a week, but sometimes sixty.” If it gets really busy, she could hire a manager. “I don’t have to get rich from it. The university is my priority. “

Her company, ReddLock, is the reason that she started studying Law two years ago. Because she didn’t know anything about running a business, she enlisted a business incubator, an organization that helps starting entrepreneurs. She felt she didn’t get what she paid for, and decided to break off the collaboration. But they didn’t just want to let her go.

She called in one of the most expensive lawyers in the Netherlands, which she could not afford. “He was very compassionate of my story and willing to help me. Due to my lack of money, I prepared the case myself as much as possible. His intern checked my work and the partner signed the emails.” With some bluffing, she was able to leave the organization.

“Because of this experience, I decided to study International Business Law,” she says. “From now on I wanted to know exactly what is written in contracts and be able to read between the lines. This will never happen to me again.”

A year later, Security Studies began in The Hague, something she has always been interested in. And Urban Studies also appealed to her. “I thought: I will just try both, and if I don’t make it, I can just quit. But I liked it so much that I kept studying both. “

To keep up with everything, she makes schedules in a Bullet Journal that leave nothing to chance. “If a psychologist were to look at this, I would probably get all sorts of labels immediately,” she laughs. That she is perfectionistic can at least be deduced from this. Sometimes she even misses deadlines because of that.

“Luckily my teachers know me, otherwise they might think it’s laziness. Last week I missed a paper deadline because of my enthusiasm. I had a good subject in mind, and reading about it made it better and better. I would quickly be reading up to 40 articles instead of 15 because I also want to read articles that the researchers are referring to, and by then the deadline has passed before the paper is good enough for me.”

Van der Laarse has tried all kinds of methods to test how she learns the fastest. At the moment this is the so-called Pareto principle (also known as the 20/80 principle): with 20 percent of the time, she gets 80 percent of the work done.

Although her schedule looks like it takes more time than it opens up, she says: “It has never been so quiet in my head. In the beginning, it was time-consuming, but I am getting better at it. I was always extremely stressed. Not anymore. I can no longer think that I am not doing enough and that also gives peace. If I ever have the time, I will make an app of the system, so that everything is clear and it is no longer on paper. “

Her weeks are color-coded: a black week is everything at twenty percent, a red week is everything full-time, and therefore not according to the Pareto principle. The reflections on her stress levels and emotional health ensure that she does not go too far. “If too many consecutive weeks are red and my stress levels are high, I have to take it easy and plan a black week. If I have done everything according to my schedule, that feels like enough. Then I can rest.”

At every daily entry, it says “Would Oppa be proud?”. “ ‘Oppa’ is Korean for an older brother. I have a good online friend who is very pragmatic and efficient. The question is always: would he be proud of me?”.

Every day, she plans exactly what tasks she must complete and how many ‘Pomodoro’ (a time block of 25 minutes) are needed to do so. To concentrate, she uses Forest, an app in which you plant a tree that grows when you don’t look at your phone, and stops growing if you do. At the back of her book are roadmaps with the tasks subdivided into subtasks, which she neatly crosses. “You can immediately see if you work fast or are behind.”

Maintaining a social life in addition to all this is difficult, she admits. “I usually combine it with spending the night. I have a boyfriend, but we don’t do much together except for sleeping. Last weekend I had to take a break and I stayed over at a friend. We would just be studying together, but it still feels like I am out of the house.”

She also barely sees her family, sometimes at four-month intervals. So she spends the Christmas season with them. “During Christmas, I will be sleeping a lot, but mostly spend a lot of time with them. Christmas is one hundred percent dedicated to my family.”

After completing her bachelors, she wants to do a master’s degree (“probably several at the same time”) and her dream is to get a Ph.D. “I really enjoy academic research and I read and write quickly, which is a big advantage. People often ask me how I do everything at once. Maybe I’ll start a blog about it.” 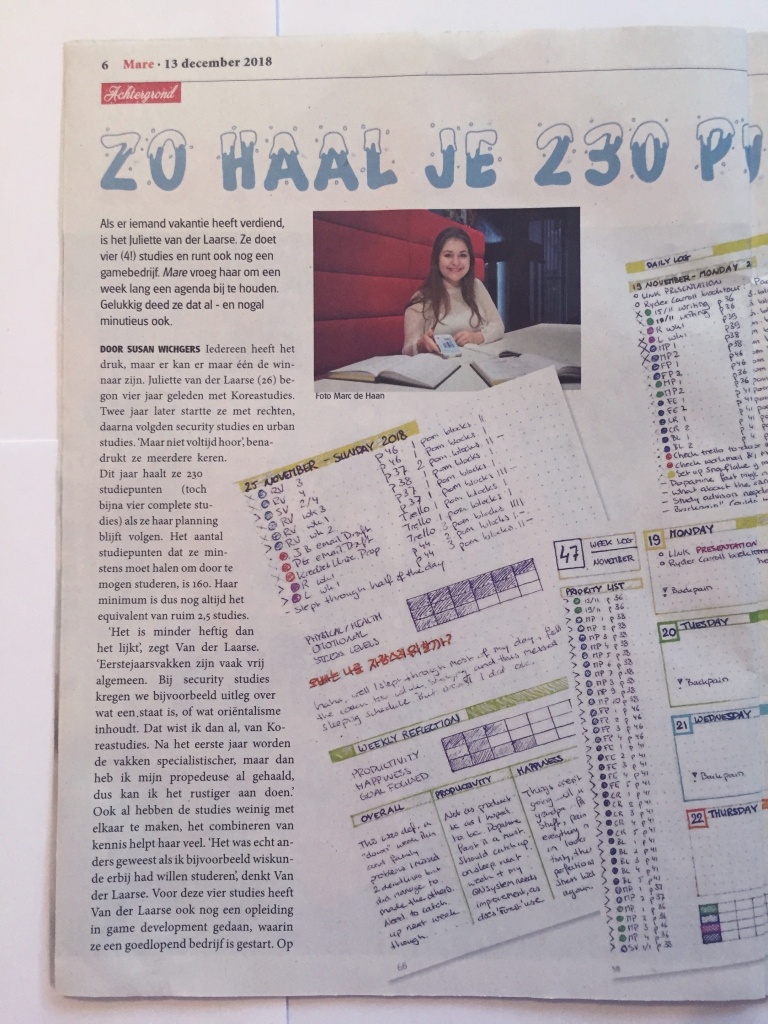 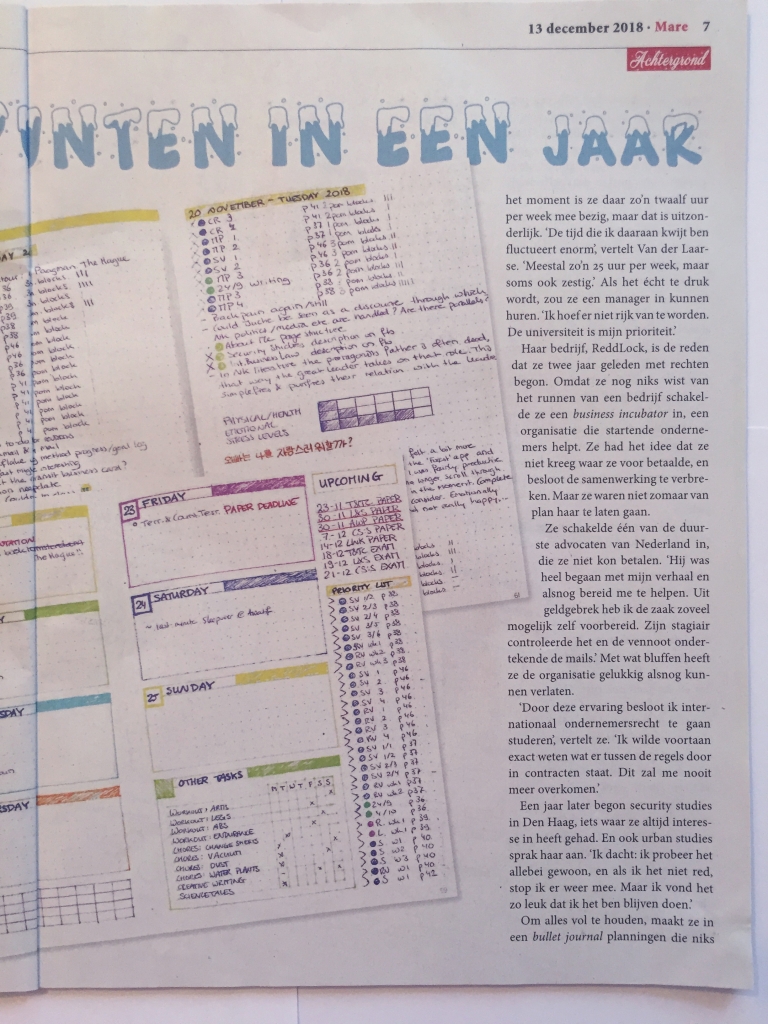 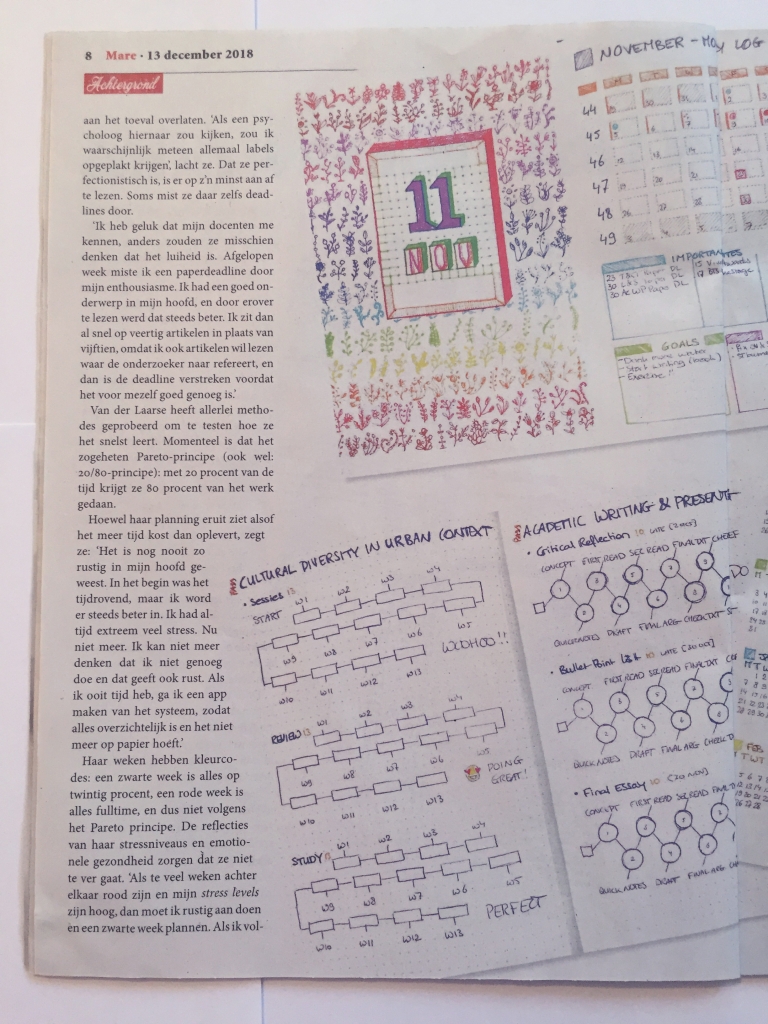 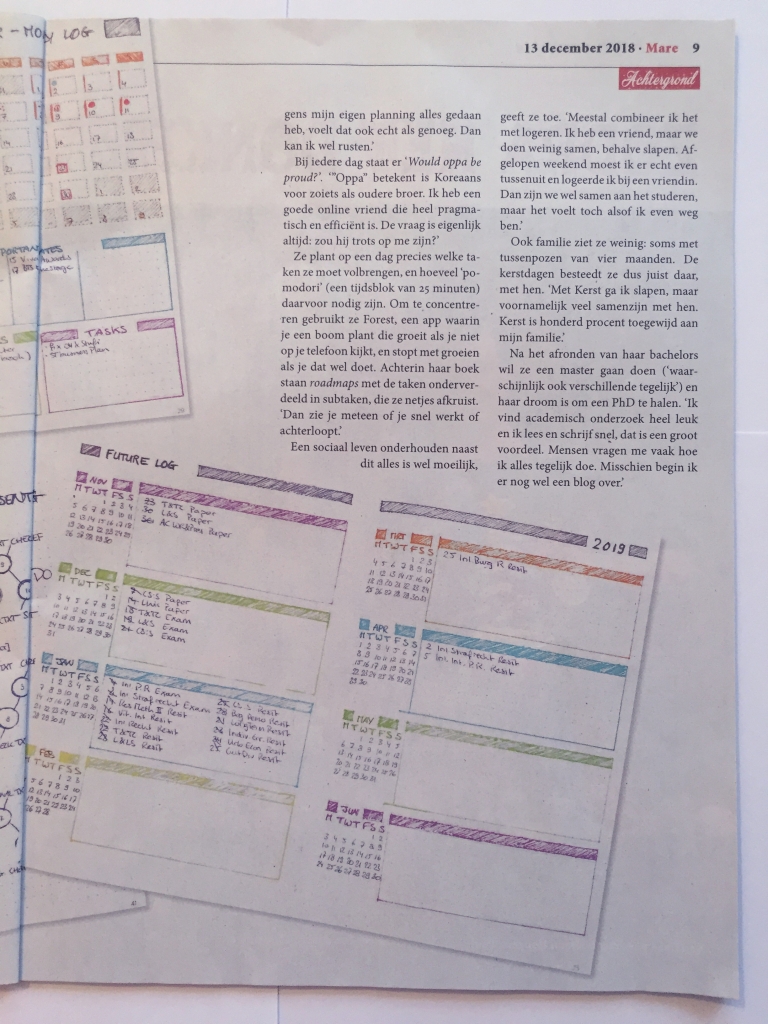